Our Next Exhibition is

in Nelson. Ian and two members of the International Railway Modellers of Nelson - Terry Sutton and Brian Galpin, booked

50m from the hall for the exhibitors and traders. This formula continues and is successful to a city that no longer has a railway

running to it. The show has been very popular and averages 1200 to 1350 viewers over the weekend. 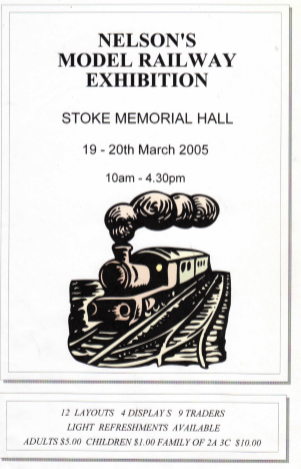 As can be seen we had 12 layouts, 4 displays and 9 traders and the weekend was a success although

and move between the various layouts and displays. Now as the plan of the hall and all its dimensions

are on a computer and the measurements of layouts known, it is an easier and more accurate exercise

in mapping out the floor plan for each exhibition. After the 2006 show it was decided to hold the

shows around the South Island, a legacy to the work of Malcolm Cotter.

which is restoring a Wb locomotive, the Nelson Society 0f Modellers and Fifeshire Foundation.

raised funds by providing the light refreshments for the show participants and viewing public.

a 100metres from the Turf Hotel, due to an earthquake order being placed on the Stoke Memorial Hall.